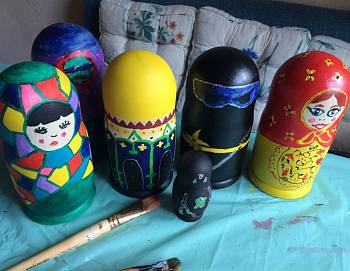 When you and your kids are tired of regular sightseeing tours, we invite you to have fun painting your own matryoshka-doll instructed by a professional artist! The class takes place in one of the small cozy cafes designed and painted by the artist, where you can also enjoy a cup of tea or coffee with a croissant! 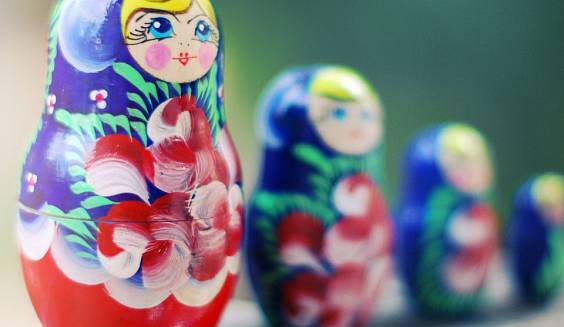 A matryoshka doll, also known as a Russian nesting doll, Stacking dolls, or a Russian doll, is a set of wooden dolls of decreasing size placed one inside another. The name "matryoshka," literally "little matron," is a diminutive form of Russian female first name "Matryona" or "Matriosha." A set of matryoshkas consists of a wooden figure which separates, top from bottom, to reveal a smaller figure of the same sort inside, which has, in turn, another figure inside of it, and so on. Traditionally the outer layer is a woman, dressed in a sarafan, a long and shapeless traditional Russian peasant jumper dress. The figures inside may be of either gender; the smallest, innermost doll is typically a baby turned from a single piece of wood. Much of the artistry is in the painting of each doll, which can be very elaborate. The toys often follow a theme; the themes may vary, from fairy tale characters to Soviet leaders. Matryoshka dolls are commonly referred to as "babushka dolls," babushka, meaning "grandmother" or "old woman."

NOT suitable for people with limited walking ability and wheelchair users.
No experience required!
Fun for all ages!
For cruise ship passengers it's best to include this activity at the end of the tour day #1 so that the dolls could try until the following day!